which meansThe House That Transmits the Original Current (Energy)

We are members of the British Birankai and are directly affiliated with the Hombu Dojo, Tokyo, Japan.

We are members of the JAC (the Joint Aikikai Council) and all students are insured through the JAC scheme.

In 1973 Steve was awarded Shodan (1st Dan) and began teaching in the late seventies. He soon had a thriving dojo in South London. In 1978 he was awarded Nidan. (2nd Dan)

In 1979 Steve renewed contact with Chiba Sensei who had left the UK to make his home in the U.S.A. Having informed Chiba Sensei of his hopes to visit Hombu Dojo in Tokyo for an intensive period of training he was delighted to be given letters of introduction to Doshu Kisshomaru Ueshiba and others making his trip very successful. Although the visit was a short one he trained intensively at Hombu Dojo with the current Doshu and Sensei’s Yamaguchi, Osawa, Shibata and many other Shihan

In 1989 TK Chiba Shihan invited Steve to teach at the Aikido London Headquarters, Shinmei-kan Dojo. (Shinmei-kan). In that same year Chiba Sensei confirmed his Yondan Grading with Hombu Dojo. Steve taught at the Shinmei-kan Dojo for 17 years. until his sabbatical in 2007. 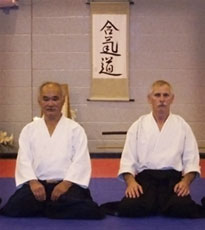 In January 2003 he was awarded Godan (5th Dan) by TK Chiba Shihan and has been a Shidoin with the British Aikikai/Birankai since its inception and also a member of the Teaching Committee.

In August 2011 he was awarded Rokudan (6th Dan) by TK Chiba Shihan.

Apart from teaching in the UK he has also taught in the U.S.A, Canada, China, New Zealand, France and Spain.